August 11, 2011
It all became a rather long day for everyone involved, starting with the press day for the Shoreham airshow and a series of sorties for tomorrow's newspapers capturing the aftermath of the riots. The Sony distribution centre in Enfield still burning when I left it.

The weather today was simply awful for airshows. Poor Eastbourne lost the greater part of its programme and I struggled to get into Shoreham in the low cloud, strong winds and drizzle. My FX team leader, Guy Westgate (pictured) had an even longer trip which started  on Wednesday evening in South Africa, bringing back his BA 747 to Heathrow and then on to RAF Halton to pick up the PA25, which had a flat battery, followed by a real challenge to reach Shoreham airport before the weather closed in completely. 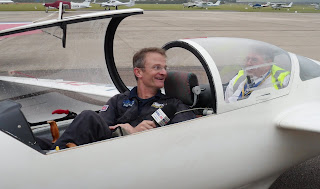 The poor members of the press, present in some force, then had to make do with all the available display aircraft gathered together, much like a circle of wagons and then between interviews with the pilots, imagine that we were putting on a preview display in advance of next week's big show.

Guy and I finally managed to struggle out of Shoreham below the cloudsat low-level just after 2pm to drop the 'Tug' over at Dunsfold and then for me to ferry Guy back into Halton to get his car. From there I ran on to Rochester to get the plan for the newspapers and then spent an hour cris-crossing London for specific photos of the riot damage.

What amazed me most about the destruction of the Sony depot, is that it's miles from any of the riot areas on the edge of the M25. So I suppose that a number of  people felt aggrieved enough by the society in which they live, to drive all the way to Enfield and set fire to this huge building as a form of self expression, while selflessly attempting to save millions of pounds worth of high-value electronic goods at the same time. These were of course safely stored in their homes to be returned to Sony at a later date.

Anyway, time to get out of my flying suit and put my feet-up watching the news.