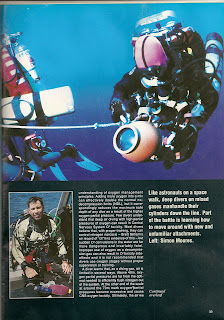 Just through with our Saturday morning, informal cabinet meeting and I must remember to thank Reg Bell and our local BSAC branch 106 for inviting me over to give a talk on 'Technical Diving', one evening last week at their clubhouse opposite the Turner Contemporary gallery. They quite possible have one of the best Turner sunset views on the island!

It's been a few years since I dived semi-professionally through a specialist company I owned. Times have changed rapidly, as has the technology, since I  made a small contribution to 'kicking-off' the 'tech' diving industry in both this country and the States -with Michael Menduno's Tek 93 show in Orlando - and ironically, was once treated as Satan incarnate by the very same BSAC that somewhat reluctantly 'dived' into the 21st century; dragged along by the demand and interests of its members.

Many highly-skilled friends, like Rob Palmer,  actively involved in the pursuit of the same interest, never made it to my age. Back then, in the early and mid 1990's recreational diving with mixed gases was still considered somewhat exotic and carried a firm health warning. Much of the equipment, such as early re-breathers, was highly innovative and in the relatively early stages of development among the Florida deep wreck and cave-diving community through trail-blazing figures such as Capt Billy Deans at Key West, where I first started experimenting with Trimix - see magazine photo above.

The physiological  science behind the decompression tables required a considerable leap of faith at the time with computers starting to be used for the complex modelling involved. If you recall the movie 'The Abyss' and the topic of liquid breathing, I once wrote a magazine article on the subject which demonstrated through the available research at the time, that it was possible but that among other factors, because the liquid couldn't shift expired CO2 fast enough, the best one could really do was sit still through a very unpleasant experience. 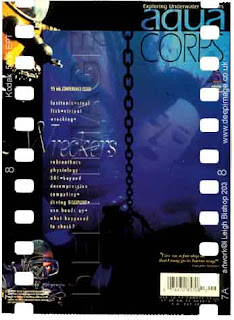 The deepest I've seen a human being down to is 800 metres on an Oxygen /Hydrogen mixture and for that I had to go over to Marseilles where Comex were conducting the experiment using a  saturation diving bell. The poor volunteers would take almost a month to return to the surface!

Here in Thanet, with the Goodwin Sands so near, wreck exploration, archaeology and diving is at the leading edge with some exciting finds and equally exciting stories; almost enough to accept the invitation to come back in the water.

Remaining with the topic of speeches, it's obviously the season for it.  Broadstairs Rotary Club have invited me to sing for my dinner at the North Foreland Golf Club, I've a presentation to city CIOs on cyber crime and espionage at Quaglinos in Mayfair on Thursday morning and a disruptive Quantum computing 'wotsits' talk to give T-Mobile and Orange executives the following week. Somewhere among all this I've some flying to do as well and this afternoon's job is looking increasingly iffy in the strong winds.

As I write this I've another pilot trying to fly an RMT banner for union leader Bob Crowe over the annual Durham Miners rally but whether he's managed to get airborne is another matter.