May 09, 2011
From what I understand may be the rules, I've a welcome gap from being a councillor for a few days, as there's a limbo period between the election and the formation of the new council. There's a real temptation to speak freely for the first time in four years but I'll resist it! 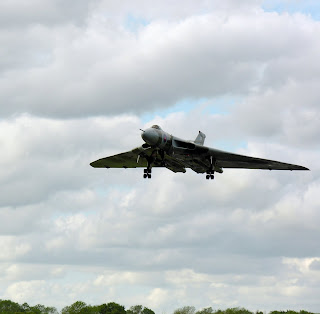 A good day at the first airshow of the season yesterday, with the Vulcan making it's very noisy and impressive appearance. Not only did it set off car alarms but almost shattered my eardrums, as I was standing on the opposite side of the runway display line when it climbed with full power directly above me.

Taking part in my own first-time display, I don't know what was more worrying, the prospect of 'cocking-up' the tight routine in front of 5,000 people of the potential to dig a small crater if I got it wrong. As it was, it all went pretty well, although I couldn't hold 200 feet along the display line in the strong wind and ballooned up to almost 300 feet as we came through with the glider pirouetting behind me.

It all rather reminded me of motorcycling. I used to write for several UK magazines in the 80s and 90s and would take super-bikes down to the track at Brands or Donnington and the low level work and tight turns felt much the same except that in the air, both hands and both feet are working very hard at the same time, with throttle, stick and rudder and your eyes are glued to the airspeed indicator and the altimeter looking for precise numbers.

The really hard work is done by Guy Westgate in the glider and having been there in there with him once, I can tell you that unless you have a cast iron constitution, you wouldn't want to repeat the experience!