December 09, 2010
Watching from the sidelines, it’s interesting how the on-going WikiLeaks story is encouraging a conceptual shift in information security thinking.

Today’s virtual battlefield offers parallels with the Maginot Line philosophy before the outbreak of the Second World War; lots of trenches, barbed wire,’ impregnable’ fortresses and firewalls, a hardened security layer designed to hamper infiltration and movement and slow-down any digital attack on business assets. When U.S. Army private, Bradley Manning, an information analyst, allegedly passed hundreds of thousands of classified State Department cables to WikiLeaks on re-written music CDs, he revealed what many of us knew already, that a $20 billion a year global information security industry can be proved quite helpless against the weakest and most disgruntled link in the organisational security chain.

It can be argued that WikiLeaks founder, Julian Assange’s biggest tactical mistake was not that of revealing classified United States diplomatic cables but rather threatening to publish sensitive commercial information ‘leaked’ from one of the country’s largest banks. Last week, when news of this first broke, shares of Bank of America fell more than 10 percent. Where government’s may be forced to act transparently, banks are a little different and it very much looked as if through self-interest, they were encouraged to join-ranks against a common threat, through the simple expedient of cutting WikiLeaks and Assange off from funds and sources of credit, prompting the swift retaliation, in the form of DDOS attacks this week, from Assange’s supporters against the payment providers and hosting services involved, such as MasterCard and Paypal and Amazon. Even Twitter has appeared in the firing line. 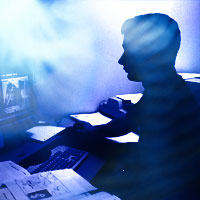 So, if you’re a business, what does all this fuss about stolen diplomatic gossip mean to you and indeed, do you really care? Security solutions specialist, Cryptic Software might argue that the protection of sensitive information assets through the availability of a unified and proactive approach is a priority that any organisation ignores at its peril. From a business perspective, the most damaging security breaches frequently occur on the inside of the corporate firewall and are either noticed too late or not at all. Where a distributed denial of service attack may effectively remove an organisation from the Web for a short period, the consequences may be painful but not indefinite. Losing a million customer records and bank details to an employee may be a little harder to swallow and so a security layer involving monitoring, reporting and forensic tools offers a simple answer to a serious risk.

The lesson being offered by the Wikileaks story and the argument posed by Cryptic Software are clear to anyone to cares to place them in context. The larger the organisation the heavier the potential fall where tunnel vision is focused at sanitising the digital perimeter of the organisation and ignores the simple human risk from within. Secondly and for purposes of simple compliance and governance, an organisation needs to be able to produce an audit trail for its commercially sensitive assets and have some automated means of alerting in place when large amounts of data start being moved and copied in a manner that both breaches policy and might encourage suspicion.

The US military and HMRC aren’t the first organisations to lose huge volumes of data and they won’t be the last But thanks to Assange and WikiLeaks business is starting to wake-up to the idea that a sizeable real-estate security investment in the Maginot Line isn’t going to offer much reassurance when the back door to the organisation is left exposed to an unhappy employee with a personal mission, armed with a tiny weapon of mass-destruction, a simple and inexpensive, thumb-sized 100Gb USB drive!