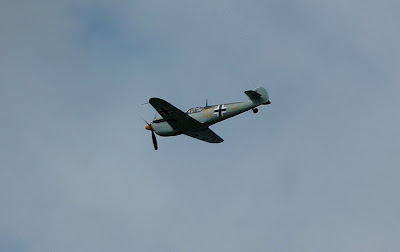 My own flight was blown away by the weather this morning but from the look of it, everything else went according to plan at the ‘Big Event’ and when I was up there at lunchtime, there were so many fairground amusements, it did rather remind me of Dreamland in its heyday.

I had lunch at the Phoenix club mess and watched the Red Arrows take-off at Manston and almost instantly disappear into an intense downpour but assume they popped-out of it in time to entertain the crowds at Palm Bay.

A little later, I was at the seafront in Westgate waiting for the Lancaster, Spitfires and ME109 to appear and managed to get some photos of the mock dogfight swirling over Margate. How times have changed! 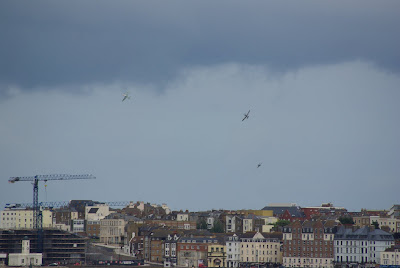 As a photographed the Me109 fly past back along the coast towards the west, followed by the Spitfires, a group of boys playing football didn’t even look-up, not even when the Lancaster swept by in the opposite direction towards the airshow. I was of course raised with the excitement engendered by the appearance of a Spitfire and remembering back to the making of ‘The Battle of Britain’ here in 1969, the thrill of seeing Messerschmitt 109s or Heinkel III bombers was almost too much to bear for a thirteen-year-old schoolboy. But this is a different era and why, as one passer-by commented when he observed the same as I did, we need to remember the events and the fragile aircraft of seventy years ago and the sacrifices that a generation made to keep us free.

If the wind drops within manageable limits tomorrow, I’ll be airborne as scheduled but it’s a little too rough up there to risk towing a banner. The best analogy I can think of would be putting to sea in a rowing boat in the same conditions!