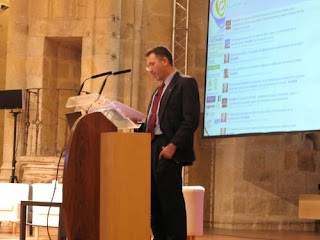 After almost two weeks away, I see the battery life on my Amazon Kindle reader still shows half charge and that's after wading through Dan Simmons' novel, Ilium, and having started the sequel Olympos as well. If you can imagine, Homer's 'Iliad', Shakespeare's 'Tempest' and some advanced quantum physics, all shaken vigorously together, then you've the basis for a rather imaginative novel of both the distant past and far future. The great thing about the Kindle device is that I can also load for free, the complete Iliad, Herodotus' travels in ancient Egypt and a great deal more besides and so in a very short period, it's completely changed my reading habits.

I can see a near future where devices like this one actually have liquid crystal pages as the technology now exists. So you buy perhaps a six-page device or twelve-page device to suit your budget and the first page is wirelessly synchronized with your email, several more display word or PDF documents, another is the book you are reading and so on. Soon they will be as cheap as any other commodity device and with electronic paper cheaper than the real thing, children will carry them to school in the place of books and will have access to everything and anything mankind has ever published in their schoolbag as well as everything and anything they have ever written during their school years at their fingertips.

It was the kind of idea I was giving a talk on in Spain a week ago, with the rapid evolution of what is called virtualization or cloud computing, where technology is delivered as a utility, much like electricity, a model we are already seeing with the evolution of a number of products from Google and Amazon. Anyway, given the exponential growth in computing power, still doubling every two years, thanks to Moore's Law, Christmas in 2015 is going to have on display some quite remarkable technology in PC World and Comet that we haven't even thought of yet!

Back in the real world, I'm confronted by boxes of Christmas cards to sign and seal. One day, someone's going to come-up with a process that automates that too, I'm sure. Just supply the names and addresses and a scan of your signature(s) and season's greetings will become as magic as a Jamie Oliver Christmas. Me, I'll have to make do with inky fingers for now as my fountain pen leaks and I'm running short of stamps. Yesterday, I visited Westwood Cross on my motorcycle to buy some presents. Given the frenzied seasonal madness that now surrounds it; I plan to avoid the roads around it now until the New Year if at all possible