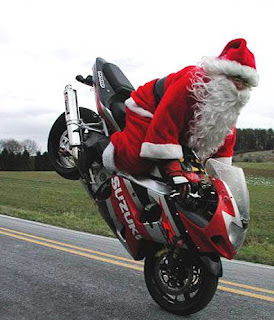 Well, that's another Christmas Day, past. I've been out this morning and would personally like to express my personal 'thanks' to the occupants of the house which regularly dumps its household rubbish next to the council bin at the start of the St Mildred's Bay car park. I'm sure those responsible and I could read out the names from their Xmas present labels, will be delighted to know, that with help from the ever present and voracious seagulls, the remains of their Christmas dinner and gift wrappings, are now scattered as far down as the beach. Strangely enough, I see, even the gulls won't eat Brussel sprouts.

Further down in the recycling area, people either can't be bothered or are not strong enough to lift the cover on the skip and have dumped bags of wrapping paper and boxes next to it. Yesterday, I shoved a whole load of boxes and paper to the back which was blocking the opening. So what happens next, is when the wind picks up, all the paper will end-up decorating the putting-green and the sea front. It's a shame because up until now, the beaches and sea-front area were looking remarkably clean, with great credit to the council sweepers and this will soon change as the paper becomes sodden and scatters.

Today, I had considered changing the template on this weblog but if I do, I'll lose all the links down the sidebar and would have to type each one back in again, a rather long-winder process. Also, because I have a number of 'Blogs', such as Zentelligence, I can't easily include and move other code around on the later interface, whereas the old blogger code accepts HTML (however poor my scripting is) so I guess we're stuck with it for now.

With less than a week before the start of 2010, I need to think of a New Year's resolution. The more immediate priority is to get back into a personal fitness regime. With my travelling around this month, freezing weather and two colds, I have 'dropped' the ball and need to re-discover the willpower to get back into my regime. The problem I find, post-fifty, is dealing with the challenge of discomfort and fatigue when one re-starts and I can easily understand why people simply give-up on the gym as falling asleep in the arm chair is a far more attractive option than lifting weights in the cold.

What I would like to do is take a quick break in the New Year if the opportunity allows. I haven't had a holiday in over two years and it would be nice to go exploring again. It's a great way of losing weight as well! Places I've always wanted to visit include the oasis of Siwa in the western desert, Reigandou in Japan, the ancient city of Timbuktu and Hissarlik in Turkey, the site of ancient Troy. Maybe one day!

I did offer to take my daughter to Westwood Cross this morning but she gave me a pitying look and described the idea as 'madness.' I'm sure she's right. Has anyone else made the attempt?