December 29, 2009
I can't remember a time when I read so many books over Christmas. This year, it's a consequence of having my Amazon Kindle reader and as I've written here before, the results are quite remarkable in terms of easy and immediate access to works of both fact and fiction. Not one for holidays, the Christmas break is a time when a can enjoy a a good book without the world outside intruding too much on a temporary truce from the reach of email and the telephone. I can even turn my Blackberry off!

For many of us, each decade is one of those periods in our lives that we can most easily recall. In 1970, I was in my mid-teens, in 1980, I was starting a new career and in 1990, I recall that Microsoft's Windows was starting to make its presence felt over IBM's OS/2 Operating System. That technology, still very much in its infancy, would be inconceivable to the teenagers of today, where even the lowest-end iPod Touch carries 8Gb of memory and computing is heading towards a virtualized existence in the 'The Cloud' dominated by the likes of Google and Amazon. 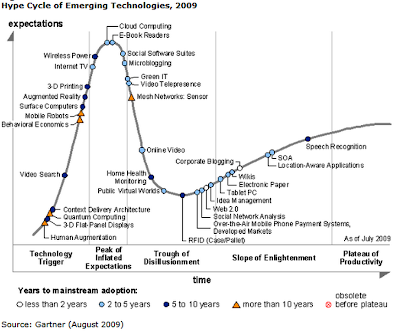 There's speculation this morning that unemployment may jump by another 250,000 this year to 3 million. There's also political talk of offering greater support for new skills to better empower our economy. It's a topic I've been looking at for some time now and I'm far from convinced by the rhetoric.

The fact is that the vast majority of our workers continue to be employed in traditional jobs. The new job types created by technology represent a relatively small fraction of employment and often tend not to last very long.

Even within high technology industries, the bulk of jobs are traditional jobs. Suppose you found a new technology company and it starts to grow. Who do you hire? Engineers, people to work in accounting, human resources, marketing and finance; administrative assistants and more: these are all traditional jobs. The people working at Google do not all have new-age jobs; by and large, they have the same types of jobs as people working in any technology-focused business. What needs to concern us is not just the number of new jobs created by technology, but the types of jobs or as I said in Spain this month, To suggest that technology is suddenly able to create completely new job categories capable of absorbing millions of workers being displaced from traditional jobs is hopelessly optimistic. In fact, what we are seeing is more and more job-types, such as cashiers and bank staff, being automated out of existence at the base of the work pyramid and towards its apex, automation is falling heavily on knowledge workers and in particular on highly paid workers as systems and processes become more intelligent and efficient. I see this all the time in the IT industry as more and more people I know lose their jobs as companies, driven by the effects of this last recession streamline and downsize to leverage every penny from their balance sheet.

As large numbers of workers are automated out of their jobs, the economy may eventually go into decline because each worker is also a consumer and as computers are advancing in capability they will increasingly invade the realm of the highly educated. We'll likely see evidence of this in the form of diminished opportunity and unemployment among recent graduates and also among older university-educated workers who lose jobs and are unable to find comparable positions. It's a complex picture, described by Martin Ford, in his book, 'The Lights in the Tunnel: Automation, Accelerating Technology and the Economy of the Future' but the evidence for this change exists all around us to see.

With Silicon-based digital computers expected to reach their physical limits in terms of increased computer power sometime after 2020, this coming decade, given the exponential doubling of computing power, is going to bring changes that most of us can't imagine, as the paradigm shift rate accelerates. It took 15 years of computing to DNA to sequence the HIV virus yet SARS was sequenced in only 31 days. For most of us the internet started after 1995 and it's taken fifteen years to become pervasive. That same kind of disruptive shift to our society can now be achieved in less than five years, given the molecular technologies that are starting to make an appearance and so the really big question and the one our economy hangs upon, is how on earth we plan for new skills and for new ideas that haven't been invented yet when as a society we have lost our agility and our competitiveness and become yet one more top-heavy, over-regulated European poltico-bureaucracy?

I wish I knew the answer!