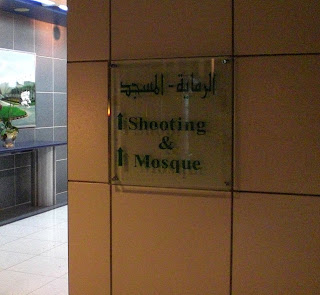 I haven't blogged for almost a week and so I'll start this entry as my Etihad flight from Abu Dhabi, flings itself over the desert coast and climbs away towards Bahrain and London Heathrow, several hours away.

I can't praise the quality of service on this airline enough. I'm sitting in economy and yet Etihad is superior to business class in most other airlines, such as Iberia, that I flew with last week to Madrid. The digital entertainment system, all touch screen, is quite remarkable with enough to keep me busy for hours; I watched 'Ice Age 3' and 'District 9' on the way out and I plan to start today with 'Dillinger' once I settle down after typing this.

The flight attendants on this new Airbus look as if they've freshly arrived from a beauty pageant. I suspect that if they were suddenly exposed to the harsh winter light and charms of Cecil Square, they might wither away instantly; like delicate tropical flowers. On the way out to the emirates, I was chatting to the young First Officer, also neatly pressed into his uniform, who had recently joined the company from Virgin Atlantic. Apparently he had been laid off at the start of the recession and fallen straight back on his feet with a job offer from Etihad and a change of lifestyle, living in Abu Dhabi. Given the legions of airline pilots who have also lost jobs recently, he considers himself very lucky indeed.

As one might expect, the place is spotlessly clean and tidy and no sign of even a single marauding 'Pit Bull' terrier to remind me of home. I did see one discarded water bottle during my time here but the local people take considerable pride in their city and litter just doesn't seem to happen in the way we understand it; the city authorities also being very efficient in removing it. No graffiti either but then I suspect that nobody has ever tried to test the law in this respect, given that the country is not a signatory to the European Convention on Human Rights and anti-social behavior is treated very seriously indeed by the courts. 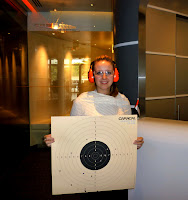 For the first ecrime congress (Middle-east), I've been staying at the Armed Forces Officers Club, which is unusual in having a mosque and a sophisticated, air-conditioned shooting range next door to each other in the complex. There's also a small bank tucked in between them. I imagine that if one applied for planning consent for the same layout, in say Manchester, there might be rather more difficulty in gaining approval from the city council once they saw what was on the plans. There's also which an Olympic size swimming pool and a gym to match with a very impressive Turkish bath should one get bored.

I toddled off to the indoor range with my colleagues and was reminded of the scene in the first Terminator movie, when 'Arnie' visits the gun store and asks for a 'Gas Plasma rifle.'

"Have you shot before sir," asked the nice girl behind the reception desk.

I replied that I had and surrendered my passport and filled in the appropriate waiver. When this was done I selected what I wanted to shoot from the menu and opted for a semi-automatic SIG 226 and 50 rounds of 9mm ammunition. The SIG is a highly reliable piece of Swiss engineering and I've never had one experience a blockage. The range appeared to be used both by locals and the small groups of American advisors and it was clear that the country is spending a great deal of money on both military hardware and training, I assume because Iran is only a matter of miles away across the disputed waters that saw a racing yacht out of Bahrain impounded last month. 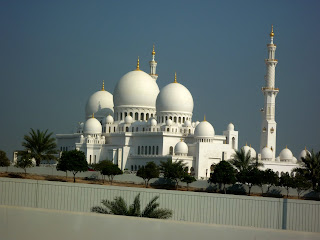 While Dubai's economy went rapidly down the tubes last month, it's clear from the short time I had in Abu Dhabi this week, that it's apparently unscathed by the financial turmoil that surrounds it. From the sheer size, ambition and opulence of the surroundings, it's clear that 'the winner is the one that finishes with the most toys' and I'm looking forward to a return visit in the not too distant future. It's hard not to wonder, for a fleeting moment, what some of that fabulous wealth could achieve around my own sea-front, town, Margate, here in Thanet, rather than around the cornice in Abu Dhabi.