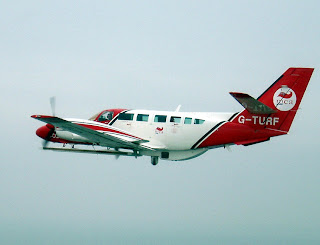 Strangely enough, I was flying a 'Jury Team' election banner all the way along the M25 from Rochester to Reading yesterday, having had no 'takers' for my 'Save Gordon' campaign.

While I was in the air, I could hear the rescue services looking for the reportedly missing light aircraft from Cambridge to Lydd; a helicopter and the Coastguard Cessna from Manston (pictured). I rather think that the pilot, a Swiss, I hear, may simply have gone somewhere else and forgotten the strict rules governing letting ATC know of a change of destination. I hope so anyway

Based on today's election results, I'm wondering, like many other, if our Prime Minister will survive the week or perhaps go down in history as Labour's worst poll performer since Michael Foot. The PM who nobody voted for and the Chancellor and then unlucky Prime Minister, who supervised the greatest 'Boom to Bust' phenomenon since the Great Depression of the 1930's

With both Hazel Blears and Jaqui Smith, very publicly jumping ship before the election, I'm guessing Chancellor Darling is next, as Gordon wasn't prepared to say whether the former would last the week either in Prime Minister's questions yesterday.