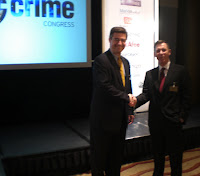 A rather long day away from home, that challenged the boundaries of the different 'hats' I wear.

The Times newspaper apparently want to do a story on Margate's regeneration and the many challenges that seaside towns face in general and so I'm trying to help the journalist along with the information she needs and perhaps a visit to the town next week. I should remind her that Ramsgate, the millionaire's playground of the far South-east is certainly worth a visit as well. She hasn't discovered ECR, Michael Child or even Tony Flaig yet but I'm sure she will in time!

Meanwhile, I've been buried in the depths of the ecrime congress watching a trickle of enquiries for aircraft banners trickle into my Blackberry. The season normally starts in a week and from now on, recession aside, the calls start coming in; starting with a marriage proposal over Brighton on Friday

Several fascinating presentations today, among them, Chris Kelly from Facebook (pictured), I forgot to turn on-on the flash as you can see. Online crime continues to defy efforts to contain it, leaving the head of the German Federal Police Intelligence Unit to comment in his lecture: "As long as we play fair, we will lose""

An old FBI friend, re-appeared to explain how he' dismantled' the entire Dark Market forum, used by organised cybercriminals around the world to buy and sell credit card data, user names and passwords. after becoming a highly trusted operator, he became the global crime network's administrator. Unfortunately, thanks to US freedom of information laws, a journalist after a scoop, released his name into the public domain. It would come as no surprise to me if Hollywood chose to make it into a movie, it's such a remarkable story.

Another fascinating lecture from the intelligence community today, was on crime, money-laundering and terrorism involving virtual worlds and games such as World of Warcraft and Second Life. Where the latter is concerned I'm still trying to digest the fantastic scale of the criminal opportunities and the money that can be made and laundered outside the control of law-enforcement agencies and Governments. I hadn't realised until today that you can set-up your own virtual bank and from there, you might guess, the opportunities for crime are almost endless and almost as lucrative as running a real bank, given recent events in our domestic financial markets!

One encounter might amuse you. One of our foreign speakers had a British minder.

"Have you a badge for me too?" The minder asked.

"May I have your name sir", I replied, "So I can have one printed at reception for you."

"How about Peter", he replied. I looked quizzical. "And the surname?"

"Your'e not from 'across the river are you?'" I asked.

"Ahh, I quite understand", I replied. "How about 'Peter Smith' then?

"That will do nicely", came the answer.