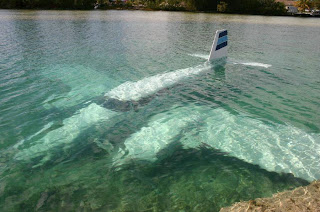 Time for a brief posting as outside, the world turns steadily whiter with the arrival of cold high pressure weather from the heart of Siberia.

In a week's time I could be finally free of written exams after two years. Over at Gatwick I have the last two remaining CAA theory exams to sit for my instrument rating, to add to all those that I previously sat for my commercial pilot's license. Ironically, I've probably sat almost the same exams before, Meteorology and Airframes, Electronics and Instrumentation but the CAA in its wisdom, rather than test on 'differences' between the ratings, (e.g polar streographic navigation) insists on throwing the entire kitchen sink at the poor candidate all over again.

Once the theory is out of the way, then it's fifty hours in the simulator and the real-thing before I can take the multi-engine flight test on instruments; likely to be the second most stressful experience of my life after having passed the original commercial flight test last July.

The other week, I was asked to fly the twin-engined Cougar back to Rochester from Andrewfield and when you are on your own, it's amazing how rusty one becomes moving between the more complex aircraft types after a period of not flying one. In fact, the biggest hurdle was the 'all singing and dancing' Garmin GNS430 comms and navigation integrated GPS unit but thankfully, I've now found a PC simulator for the damned thing and I'm alot happier with it.

The bitter cold weather that day also caught me 'on the hop'. I ran through the engine start sequence on the checklist, primed the left engine and pressed the start button; nothing happened. OK, so perhaps I'm an idiot, so I try exactly the same on the right engine; nothing happens.

I sit there for a good ten minutes wondering what on earth I might have done wrong before I give up and call-in some help. The answer, the cold weather has flattened the aircraft's battery and the only solution is to call an engineer in from maintenace to jump the battery, much the same as an car. So when the left engine starts, I can start the right engine and then finally taxi out to the runway and head for home.

My biggest project this year, the 2009 ecrime congress is coming along nicely for next month. I had a long chat last week with a Radio 4 presenter about a programme that the BBC will be doing on the subject and explained that whatever we try and do to mitigate the impact of online crime, we are always behind the curve in an arms race with very well funded and highly organised criminal interests across the globe.

So that's my Blog entry for the day done. Back to the revision I suppose. What I'm going to do when I finally stop having to study, I don't know. I'm sure it will be a shock.