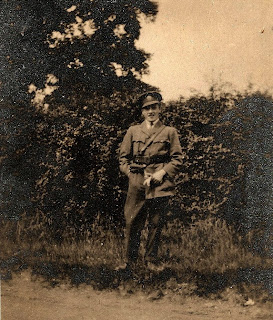 Remembrance Sunday and I noticed that the sound of the canon from the ceremony at Margate echoed toward the war memorial on the clifftop here at Westgate.

I'm reminded of three members of my own family who took part in World War I. There was my paternal grandfather, pictured as a young officer fresh from public school, who was wounded and never spoke once about his experiences.

My maternal great grand-father, who lived here in Westgate and London and who volunteered, like the novellist Ernest Hemingway, to be an ambulance driver for the Belgian army at the very start of the war in 1914. From there, he became one of the first official war photographers, working for the Illustrated London News and survived, unscathed, retiring back to a quieter life in Westgate on Sea.

I still have his small Kodak camera, in excellent working condition, in its original leather case sitting on the shelf opposite, marked with the magazine's name on the inside.

Then there was Arthur Carr Osburn DSO, my Grandmother's brother, a doctor in the Royal Army Medical Corps and a regular officer. He'd seen the end of the Boer War in South Africa and joined the war in France at the battle of Mons (unknown to the great Grandfather mentioned earlier who had a 'Mons Star' medal in his own collection). Arthur wrote a remarkable book about his experiences "The retreat from Mons", with the title: 'Unwilling Passenger' and having read one of the few surviving copies, I believe it's as good or perhaps even better than that of the poet and novelist Robert Graves, 'Goodbye to All That.'

For Arthur (whose brother Harold, was Captain of HMS Gary, pictured below) to have survived as a medical officer through all the major engagements and horrors of the Somme and Paschendale was nothing less than remarkable.Perhaps even more remarkable was how he maintained his sanity and ability to function as a doctor when faced with so many casualties under fire. 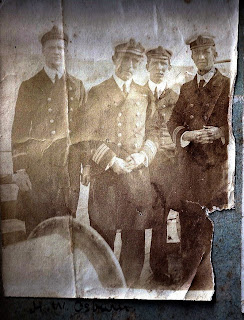 The expression: "Lest we forget", is an appropriate thought to keep in mind for all of those men and women who experienced the horrors and suffering of the 'War to end all wars.'