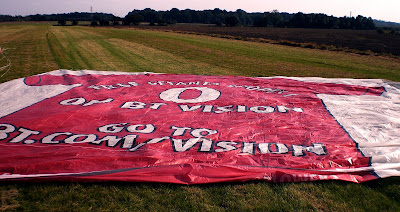 Our presence clearly didn't help the score between Tottenham and Wigan; a nil, nil draw but arriving as I did just before the match started, I'm sure lots of people saw the banner; the same being true of the match at Middlesborough earlier.

It's a really big banner and 30 feet high and you have to appreciate the effect it has on the performance of a small aircraft. You have to watch something that big very carefully indeed and even the simplest manoeuvers demand considerable effort and attention; particularly to the aircraft speed and the potential for a stall.

It's certainly not an occupation for nervous flyers or even nervous pilots. Today with a nice collection of power lines situated on the climb out, attention to both detail and aircraft performance were absolutely vital.

Back to work now on the 2009 ecrime congress in complete contrast to being a flying advertising platform. Without a doubt, variety is the spice of life!