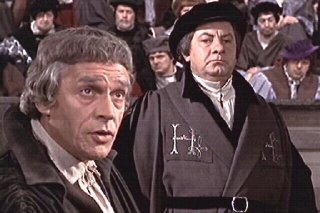 With what appears to be the rapid decline of our legal system or at least its shambolic and unholy mess, I was reminded of the Thomas More speech from actor, Paul Scofield, in the classic film, "A Man for All Seasons."

In conversation with William Roper - Perhaps today it should be Tony Blair instead, it goes like this:

William Roper: "So, now you give the Devil the benefit of law!"

Sir Thomas More: "Yes! What would you do? Cut a great road through the law to get after the Devil?"

William Roper: "Yes, I'd cut down every law in England to do that!"

Sir Thomas More: "Oh? And when the last law was down, and the Devil turned 'round on you, where would you hide, Roper, the laws all being flat? This country is planted thick with laws, from coast to coast, Man's laws, not God's! And if you cut them down, and you're just the man to do it, do you really think you could stand upright in the winds that would blow then? Yes, I'd give the Devil benefit of law, for my own safety's sake!"

If you think about it, only Henry VIII and perhaps Oliver Cromwell had changed as much in the previous five hundred years as in his own private Reformation, Tony Blair has done in ten.