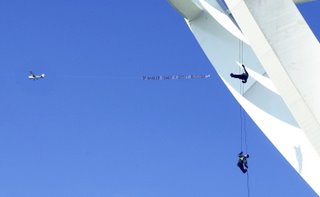 An interesting afternoon partly spent over the top of Beatle, Paul McCartney’s house. I never realised he had one in this part of the world but it’s modestly tucked away in Farmland out towards Winchelsea.

Sunday should be another unusual day. A desperate housewife of sorts wants her football crazy partner to marry her and has asked us to tow a “Will You Marry Me” banner right over the top of the Sunday game at White Hart Lane just after kick off. An ardent spurs fan, she’s hoping that the aircraft will attract his attention long enough for him to be embarrassed into saying “Yes”, as I happen to have helped her push a press release out to the papers and the TV for a little moral support.

So what do you think? Will he marry her or will it all depends on whether Spurs beats Bolton on Sunday. It’s a game of two halves you know.