March 19, 2006
It’s hard to find one’s hidden optimist reading the Sunday papers today. I’ll give you some examples of the headlines as a good reason for escaping to a quieter life in one of the more isolated monasteries in the Sinai desert.

I can’t say I’m looking forward to the budget but I’m relieved I don’t own a 4*4 Chevy anymore, as it’s being predicted that there will be a new super-level of excise duty for anything with more horsepower than a “Yugo”, which will severely limit the antics of the BBC Top Gear team in future.

However hard one looks for a ray of sunshine in the newspapers, the sense is one of overwhelming gloom; a hopelessness surrounding the future of the NHS, education, taxation, race, crime political sleaze and of course, Iraq. Like the decline and fall of the Roman Empire, this isn’t all happening overnight but a glance around at Europe, shows a society that is crumbling away at its edges, obsessed with regulation and legislation but unable to tackle the more basic demands of the population for efficient services in return for the vast sums of money being squandered on the public sector. 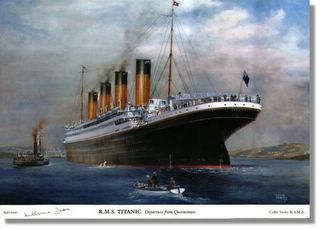 As Simon Jenkins writes in the Sunday Times today:

“This week’s budget must begin the process of somehow meeting a massive public indebtedness, not just in the form of public borrowing but also hidden in Brown’s reckless private finance initiatives and chaotic pensions policy. Brown is condemned to lead Labour from the right. As Thatcher said, there is no alternative.”

Tackling the disenfranchisement of Britain’s electorate, he adds: "They will be the elderly without protected public sector pensions, people dependent on a welfare state that cannot afford a soaring health and social services bill. They will be the 19th century’s unthrifty and “undeserving poor”, an underclass reliant in part on their children and on charity. They will be the second-generation immigrants, the poor whites of the inner suburban ring; the graduates of sink “community” schools so derided last week.”

What he describes is what we can see growing around us in Thanet, in areas of Cliftonville and Ramsgate, the evidence of our own eyes and the pressures that are placed on any population which is out of economic balance. Raising taxes since 1997 hasn’t solved this problem and arguably the divisions and the challenges are even more pronounced than they were ten years ago. I wish I had an answer but the economic time bomb continues to tick away and the mathematics is irrefutable, it’s a law of diminishing returns regardless of how much the middle classes are taxed to bolster a welfare and health system in terminal decline. Sadly none of our political parties have a clever solution that offers much more than re-arranging the deckchairs on our Titanic economy as is sails majestically on towards the iceberg on the horizon.