Bollywood at the Wheel 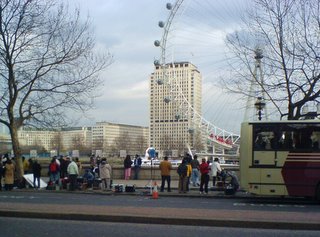 A touch of Bollywood on the embankment at Westminster last night. I was walking to the House of Commons when I was dazzled by the stage lights on the opposite side of the road. An Indian film crew was filming a “Bollywood” epic, with lots of dancing up and down the pavement.

Sadly I couldn’t catch the action with my phone camera but perhaps it was a vibrant musical interpretation of the political battles taking place on the other side of the road? Boy meets girl, Boy becomes MP and then Prime Minister. Girl becomes Barrister and Judge. Both become fabulously wealthy and live happily ever after with Cliff Richard and Richard Branson in the Caribbean.