Tribune of the Plebs

September 11, 2005
True ambition for the writer lies not in chasing an elusive fifteen seconds of fame but in making a difference.

I was an early Blogger. Before the Weblog found a place in the dictionary, I used my own ‘Blog’ to jot down columns and experiences and was pleasantly surprised to find people visiting, if only by accident or through some obscure search-engine search phrase.

Since then, I’ve tried ‘Podcasting’, video and photo-posting and thanks to the modern miracle of web-services, knitting with digital content works pretty seamlessly and almost instantaneously, a feature which I find is changing the nature of blogging as it moves closer to a future as a digital broadcast medium from its origins as simple web-based diary.

More recently, my concept of blogging changed forever, as my virtual world came back down to earth with a bump. In parallel with my technology Weblog, I have a local news site for my town in Kent, called ‘Thanet Life’ “A Hitchhikers Guide to Thanet”, with stories, photos, local politics, opinions and news. ThanetLife.com has a slowly growing audience, with just under 30,000 visits since it started in March but because it’s a Weblog it’s far more agile than conventional news sources and because it’s interactive, I can ask, in near real time, questions like “Does anyone know what the big fire to the west is” and receive an answer and a possibly a short local news item with an accompanying photo in minutes. In other words, it involves the readers a part of the news gathering process and operates without the suspicion of local political correctness or censorship that many readers attach to local newspapers.

During the General Election in May, both the BBC Politics Show and Channel 5 news were among those that sneaked a look at the Weblog as they explored the political impact of blogging for the first time and asked, with over half the population now using the internet whether this was a medium that needed to be better understood by technology-challenged politicians. Last week however, I really understood for the first time, how a Weblog could dovetail with the local democratic process and help express the views of communities in a way that will mark the shape of things to come.

On Saturday morning I found myself alone with my camera in a playing field hidden from view by a dense ring of trees and undergrowth. Possibly the last natural wooded scene remaining in my town, I was briefly captivated by the birdsong until I was interrupted by the noise of around sixty people walking through a gap in the bushes to assemble in the field for a protest and photo opportunity. 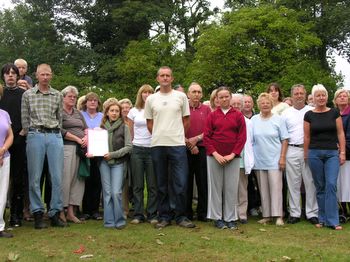 Earlier in the week, I had posted a request from the local residents association that there was going to be a protest against a planned development that would see the rural scene replaced by a small housing estate. I was there to record it the gathering, with digital photographs and an audio interview. Not a single local councillor appeared to accept a petition of over 150 signatures but I promised the assembled group of families that the internet was one way of making a difference and placing their protest on the record.

The result, using “AudioBlog” for the interview and “Picassa” for the photos, was published to the Weblog inside thirty minutes and I copied the story link and emailed it to our local MP and local councillors.

Later that day, I had a call from one of our county councillors who had read the story. “I hadn’t realised that there were so many different problems with putting more houses there,” he told me. “I’m going to have another look at this one if what the residents are telling you is correct.”

Using a Weblog to draw attention to a local issue in this way, certainly isn’t going to change the world but it does give people who feel that modern democracy is failing them, hope and reach in a way that wasn’t previously available. Talk to people, possibly anywhere in this country and they may tell you that they have very little faith in local politics to deal fairly with their concerns. Leveraging the technology and reach of the internet through Blogging can make a difference, if individuals or groups are prepared to use the web as a Samizdat, a political underground and visible means of expressing local issues and concerns.

Sometimes, I wonder if big government for all it’s fine words, personalities and focus groups has forgotten what real democracy really means. Perhaps the future of the Weblog is one way to remind them that we still exist.