Skip to main content
September 15, 2005
Spitfire Pilot - A Look at the Controls 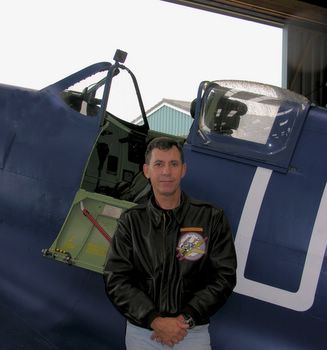 Simon Moores takes a quick look inside Charlie Brown's Spitfire. It's painted blue because it was originally in desert colours before finding it's way on to an aircraft carrier and painted in US Navy blue.

Spitfire Vb BM597 (G-MKVB) was built at Castle Bromwich and delivered on 26th April 1942. It served with 315 and 317 (Polish) Squadrons RAF at Woodvale before sustaining damage whilst landing on 13th February 1943. It was repaired, but is thought to have seen no further action. After the war BM597 was assigned to several 'gate guardian' postings finishing up at RAF Church Fenton. Acquired by Historic Aircraft Collection in 1993, it was restored to original specification at Audley End and first flew in 1997.It usually flies in the colours of 317 Squadron, but for the duration of the Merlins Over Malta project it will wear a unique Malta scheme that has not been seen on a Spitfire since the original aircraft were transported out to Malta during the war.

For the duration of the project BM597 will depict a Spitfire V wearing the codes U-2 that was to join 603 Squadron. When the aircraft were put aboard the USS Wasp they were wearing standard camouflage schemes but on the deck of an aircraft carrier sailing through the Mediterranean these camouflage patterns offered no protection. The solution was to paint the top surfaces of the aircraft blue. Paint was taken from the stores and applied to the aircraft. There is no definitive colour match because paint was mixed and watered down to ensure there was enough to go around.

Anonymous said…
I just stopped by to say hello.. I came accross your blog today I want to tell you about a new FREE debt repair/credit repair service I have put up on a website and blog take a peek herephishing scamsif you like the site please leave a comment and maybe make a link so others may get free helpphishing scams
6:35 pm