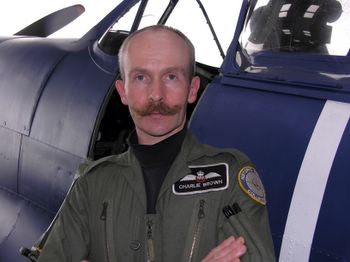 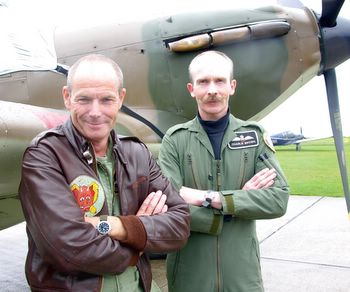 An interview with the legendary Spitfire display pilot, Charlie Brown, caught at Manston on the way to "Merlins over Malta"

Flt. Lt. Charlie Brown serves at RAF Cranwell as an instructor. As chief pilot of the Historic Aircraft Collection Charlie flies and displays both the Spitfire and the Hurricane that will be going to Malta. Charlie spent many years flying Messerschmitt 109 Black 6.

Between June 1940 and December 1942 Malta became one of the most bombed places on Earth. The battle for this tiny island proved to be one of the most decisive turning points of World War II.Situated just sixty miles south of Sicily, Malta was a vitally important outpost in the heart of the Mediterranean, and with its airfields and deep harbours, held the key to Allied hopes in the Middle East and North Africa: not only was it a crucial staging post, it was also a base from which Allied aircraft, ships, and submarines could cripple Axis supply routes to Rommel’s forces in Africa. Had Malta fallen, the Allies would almost certainly have lost the Suez Canal and the Middle East oilfields to the Axis powers, and with catastrophic consequences.

Recognising its strategic importance, the Axis forces were determined to wipe Malta from the face of the earth – and they very nearly did so. At the start of the siege Malta was woefully ill-equipped, but with the arrival of Hawker Hurricanes in June 1940, the RAF began to fight back. With the arrival of the Luftwaffe in Sicily, these saviours of the Battle of Britain soon proved obsolescent and despite inhuman heroics from the defenders, Malta faced almost certain defeat.

Relief came in the form of the Spitfire Mk V – the first seven flying into Malta from the carrier HMS Eagle on the 7th March 1942. At last the Island had an aircraft capable of taking on the best of the Luftwaffe. More Spitfires followed and by May 1942, the air battle was almost won.

You can buy Corgi Scale models of both aircraft as part of a special collection, here.

Bloggers United said…
I happened upon your blog site by chance...and I'm glad I found it!
You've got some great stuff here. Way to go!