I had been told that the news of a new Manston owner was “imminent” but couldn’t come out with it earlier in the week. - See www.thanetlife.com 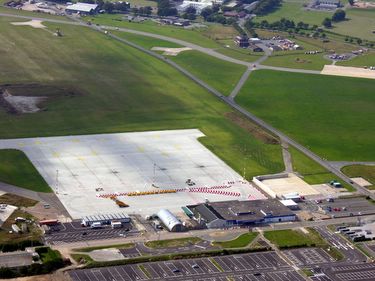 The BBC is reporting that Manston, Kent International airport, has been bought for £17m by Infratil, an existing airport operator, with completion due tomorrow.

The purchase is believed to fit in with Infratil's existing European airport business with at Glasgow Prestwick, and would be managed by the company's European team.

The BBC report has the company's Europe chief executive Steven Fitzgerald, saying that the first services to be reinstated would be freight operations while passenger operations would take longer.

"Infratil is pleased to have bought Kent International Airport. While the Airport has, for a short period, been in administration following the failure of Planestation PLC, we believe that it has strong prospects as a freight airport servicing the south of England. It is also well situated to provide regional airline passenger services to Kent and the eastern side of the London conurbation, with 1.9 million people within a 60 minute drive."

“Infratil are serious airport operators with serious plans. They could be the best news that Kent International has had for many years.”

“I’m stressing to them they must move to restore public confidence in the Airport, protect the jobs of the people who work there and re-engage with the local community in open discussion about issues like night flying and pollution. If they do that then I’m sure they’ll have overwhelming support for their plans.”

You can read the full Infratil press release here.

Anonymous said…
So you have a visitor coming your way. I read these things. :)

Anonymous said…
So you have a visitor coming your way. I read these things. :)