"Your'e not going up in this?", said another pilot this afternoon, as the rain lashed down on the aircraft next to us. "Got to", came the answer, "Bit like the Pony Express, EUjet want their banner over the War & Peace Show at exactly 16:30 and Airads have to be there." 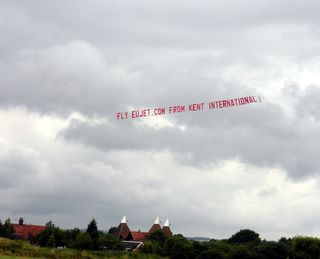 At least we had the skies to ourselves on the way down to position for the banner and broke out of the rain and dense swirling clouds in time to find the grass runway exactly where it should be.

Fortunately, the skies were beginning to clear from the west as the forecast had predicted. EUjet had its banner on time and I managed to throw a cup of coffee over myself as we hit turbulence descending through the clouds. All in an afternoon's work I guess.