It’s a tragedy for Kent and a greater loss to Thanet. The demise of EUjet dashes the hope of developing an area of the country that badly needed the business the airline could have generated to help build a relatively poor local economy. The loss of EUjet means that other budget airlines are unlikely to take the same risk in future and this also raises tsome ough questions over the future of Lydd Airport and its own expansion plans, represented by the millions being poured into re-developing the airfield by its Saudi owners. 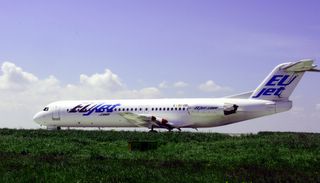 EUjet has now suspended all flights to and from Kent International Airport, a day after shares in its parent company were suspended. Even worse, passengers have been left waiting at the airport, with no flights into or out of Manston running. Five thousand passengers are reportedly affected and five hundred jobs will be lost, with some airport staff openly shedding tears as they had to deal with angry passengers marooned at the airport this afternoon.

EUjet ran four Fokker 100 aircraft, flying from Manston to 18 destinations in the UK and Europe. Unable to hit its target of 500,000 passengers in the first year, the airline had already axed two of its destinations - Madrid and Glasgow - because of low passenger numbers, and postponed plans to start flights to Cologne. It was however bullish, perhaps unreasonably about the future if it could make its investment money last. - See my April interview with Managing Director, Stuart McGoldrick - However, the company claims it has 100,000 advance bookings, worth five million Euros and one wonders why, with such strong progress visible, the bank "pulled the plug?"

I suppose that instead of towing a banner for the company on Sunday, I should have towed an obituary! It's all very sad and I feel for the marooned passengers and suddenly out of work staff and crew. Meanwhile, Quentin Wilson, is still promoting EUjet in a TV advert running during tonight's "Holidays from Hell." Perhaps someone had a sense of the irony at ITV?