You don't often see the aircraft Captain up on the wing checking the oil before the first flight of the day!

I've been over at Lydd Air and Le Touquet today, taking a right seat on the passenger flights to and from Le Touquet on one of the Trislanders that operates out of Lydd airport.

Nineteen minutes is how long it takes from the runway at Lydd to the runway at Le Touquet and for around £59 per person, it's a pretty good way of having a day in Le Touquet, browsing the shops - the sales are now on - and enjoying lunch.

The photos set from today, as promised to the passengers on the flight, can be found by following this link. Other photos of Le Touquet can also be found HERE. 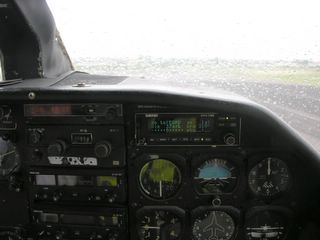 What started as a fine day in France, went downhill just in time for the rain to arrive as we shut the aircraft doors for the flight home. You can see my view of the world as we start the run along runway 34 which will take us back to Lydd in almost a straight line and in eighteen minutes at 155 knots. Beats taking the ferry or the Channel Tunnel for a day out in my view.