The BBC reports that the future of budget airline EUjet could be in doubt after shares in its parent company were suspended.

The PlaneStation Group's shares were suspended after the Bank of Scotland said it could not support any additional finance for EUjet, based at Kent's Manston Airport. 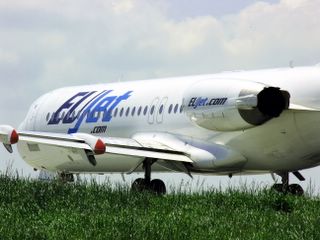 Battling to make the airline a local success story, EUjet lost £6.5m in the second half of 2004 and last month, parent group, PlaneStation had to sell off its 75% interest in the Kent International Business Park in Manston, blaming EUjet's poor passenger numbers. Let's hope, for the sake of local employment and the future of the local economy, that it manages to pull through this crisis.

Last December's re-funding was largely underwritten by stockbroker Evolution at 10p a share. The shares were today suspended at 5.35p after they fell more than 8% in early trading. The company's debts are thought to total more than £22 million.

In a statement today, The group said: 'Until now, the directors had no reason to believe that support from its bank would not be forthcoming. However, discussions with the company's bank over the last 48 hours have not been positive, and the company was informed this morning that the bank is no longer able to support the company with additional facilities.'

Flights are running as scheduled and I notice that this afternoon, there are flights from Manston to Seattle and Charlotte, North Carolina, not EUjet I should add.