Skip to main content
May 21, 2005
The Weald's Favourite Airline

It came as a surprise. Walking onto the apron at Manston with the other passengers for EUjet’s flight to Dublin, we walked past the two Fokker 100 jets and on towards the squat-looking Airlinair ATR 42-500 turbo-prop aircraft that I had previously wondered about, tucked-away in the corner. 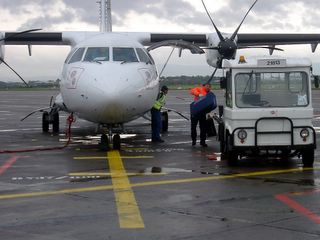 Photo of the ATR taken at Dublin - Not Manston.

Can I take a photo I asked our escort? “No” she replied, “Security”, and I nodded knowingly, EUjet having confiscated my blunt nail scissors half an hour before.

Where the BAA have now re-allowed blunt nail scissors to be carried on passenger flights, EUjet, which has it’s aircraft under an Irish registration, is still bound by Irish regulations, so no scissors or anything vaguely metallic or pointed that may pose a security risk to the aircraft or its crew.

I recently interviewed EUjet boss, Stuart McGoldrick for Airliner World and knowing a number of people, management and crew at the airline, I have been asking EUjet if it might be possible to fly the right seat of one of their Fokker 100’s for Pilot Magazine review of the aircraft, - and they’re looking into it but the ATR was an extra unexpected bonus, as I was thinking of approaching Air Atlantique for ride in theirs.

The Captain of this Airlinair ATR-42, was Francois Roubes and his First Officer is Claudio Dumay.

Francois, who was a helicopter pilot in the French navy has been a Captain on the ATR for five years, while Claudio, who was a flight engineer, has two years on type. Both are based at Orly, outside Paris. 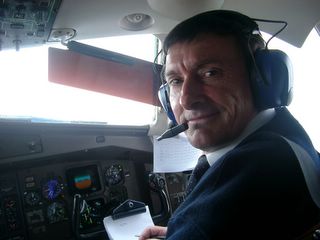 With some heavy weather and a strong headwind over the Irish Sea, EUjet UNI04W back to London, was twenty-five minutes late and it was ten minutes before seven before we were all on board ready for the flight home. This time, and about a quarter of an hour into the flight, I was invited to meet Captain Chris Kalisvaart, a Dutchman with over six thousand hours on the Fokker 100, who has been flying them since 1993 when he worked in Indonesia. His First Officer is Lee Salway, enjoying his first job flying jets. Lee built-up his own flying experience dropping parachutists before being accepted as an airline pilot, finally finding his way to Manston and a right seat on the EUjet fleet, where he tells me he’s enjoying life immensely. This was the aircraft’s second trip to Dublin of the day. 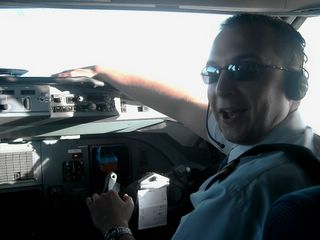 We arrived at Manston only two minutes late, thanks to a strong tailwind. As a both passenger and a pilot, I can’t fault the EUjet experience of the last two days. The aircraft that gave them so much trouble earlier on in the year, with the undercarriage emergency, has now gone and with it, the many delays and technical problems that went with it. Every new business has its problems and if you watch the Airline series on TV, you’ll know how challenging a business this can be. However, what really marks out the EUjet experience from a local perspective, is how committed the people are to making our local airline a success and how much they want to show our local and frequently cynical, community what a good service they can offer.

You can see a collection of EUjet aircraft and crew photos here.