Just back from towing Labour and UKIP's election banner around Kent and narrowly avoided being shot at by the farmers below! 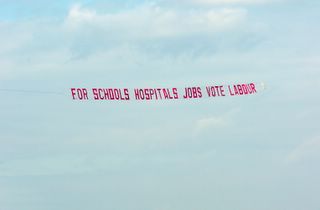 Today is the last day of election madness and it's really now a question of counting the votes that will lead to an historic third term for Tony Blair and very probably, a first term for Gordon Brown; perhaps as early as Christmas, as several of the political pundits are suggesting. Something to look forward to then?