Today was supposed to have involved a trip to Antwerp in the Stampe SV4, with friend Terry, for a fly-in to celebrate the 60th anniversary of VE day. Thanks however to a nasty-looking occluded weather front sitting off the edge of Holland, we are going nowhere and even getting off the ground on Sunday morning for a second attempt to make the airshow, looks decidely "iffy." 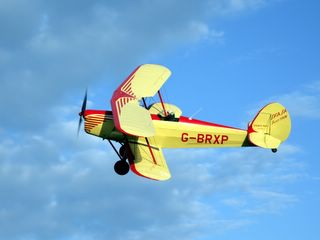 It's intensely frustrating, sitting here when you know there's a BBQ and a party to go to only ninety minutes away, around the edges of several thunderstorms which would turn the aircraft into confetti before dropping it in the English Channel.

We'll have another look in the morning and if that doesn't work, there's the Spanhoe show up towards Corby which I have an invitation to. Meanwhile, thunder and rain is battering my window again and the trees in the garden are the only things in danger of flying this afternoon.