With my smaller Windows laptop in for repairs, again, I was once more thinking about an Apple iPod or G5 but a programme on television just put me off. 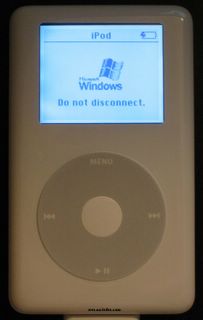 In America you can go to jail for doing this!

The Gadget show just dropped an Apple G4 and a PC from a balcony onto a concrete floor and then set about trying to discover how much it would cost to repair each one to a working state.

The Windows PC was easy. Go to PC World, buy a new motherboard for £60 as the one inside the PC was fractured, as was the case, install it and turn on the machine. It works. It may look like it's been hit by a train but otherwise it still picks up email as if nothing had happened.

The MAC on the other hand was rather different. You can't actually "buy" spare parts anywhere. Apple doesn't allow this. You have to go to an Apple dealer - they don't grow on trees you know - who may charge £50 an hour just to take a look and then, as parts aren't held in stock, you may have to wait three days, as in the programme to find out that an equivalent motherboard will cost not £60 but £400 - Ouch!

The programme's other tests really surprised me. The PC "stonked" the G4 on the graphics speed tests, where I would have bet the other way.

My conclusion. iPods are fine and Apple's are pretty, if not sexy but PC's deliver the speed and the value for money. The result. My Apple dream has ended quite abruptly, however much I might despise Windows for breaking down so often.