Skip to main content
April 18, 2005
The Tesco Principle at Work

(Writing on the socio-commercial issues of living on the Kent coast, from my Thanet Life weblog.)

To even contemplate allowing more amusement arcades to replace derelict shops in both Cliftonville and Margate high streets sounds like the height of poor judgement.

The problem we are facing in Thanet is not an isolated one and in part, reflects Tesco’s quite remarkable annual results last week. 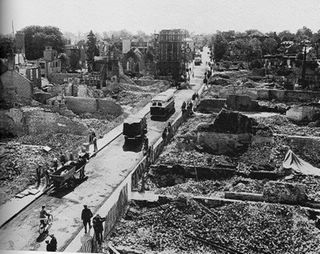 Within a five mile radius, shopping centres, such as Westwood are rapidly consigning traditional high street shopping to the history books and creating a commercial desert in their place. After all, who shops in Margate or Cliftonville now unless they really have to? Parking is often impossible and perhaps the principal draw lies in the presence of banks, now that the village banks are being steadily closed.

Shop in Margate or Cliftonville and you can see the result of a new kind of socio-commercial deprivation. More tatty shops, pawnbrokers and struggling small businesses and with them those who simply can’t get to Westwood without a struggle, because they don’t have a car.

There are three divisions and not two appearing in the 21st century. Those who have access to the Internet and the benefits of online commerce who also have access to out-of-town shopping malls. Left behind are those in the population, who have limited access to either and can't benefit from the convenience and cheaper prices that drive most of us towards the Westwood shops.

In a predictive feature for The Observer newspaper in 2000 which dwelt on the issue of a digital divide, I wrote: "Technology can help fulfil our ambitions, but it doesn't do much for people who can't afford ambition."

Thanet is poor, an area of high social deprivation and yet in a desperate search for a quick solution to the presence of empty shops, consideration is given to allowing these to be turned into more amusement arcades, where the young and unemployed can congregate to fritter the benefit money they need to keep for their basic survival.

Urban regeneration in Thanet does not equal more amusement arcades in my mind as this simply replaces one commercial problem with an even larger social one. This isn’t Monte Carlo or even Blackpool and we need to start thinking clearly about the impact that a growing Westwood is going to have on the small businesses that define Thanet as a community as it becomes increasingly difficult to for local shops to add-value in a world dominated by Tesco, B&Q, Comet and Matalan as neighbours.