I've just seen the Conservative Party video and think they could have done a much better job or even borrowed some ideas from Bremner Bird and Fortune perhaps which has some very funny clips of the different parties. 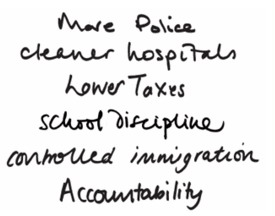 While the Conservatives might have made theirs funnier, Labour's challenges the voters' intelligence, with Gordon and Tony, the best of chums apparently, only weeks after the personal staff of each appeared to be privately briefing against the other.

Leaving aside the LibDems - has anyone see a video from them yet - or even UKIP, Labour's video is slick and expensive and the Conservatives may have missed a trick.

Mind you, in the end it comes down to who or what you believe in this campaign and what you want or expect from a government; a nanny state moving towards a European model of taxation or more of a "hands-off" and more accountable government with the promise of lower taxation and a much thinner public sector?