The tanker Linnea, captured by my camera, anchored-off the Margate road, having an unexpected visitor as the Coastguard aircraft takes a low-level pass across the bow.

You can watch a Web slide show of the patrol HERE. 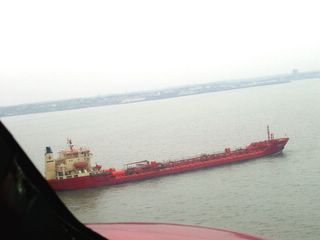 The Manston patrol has four principal assignments. Working with the Coastguard on CNIS, the Channel Navigation Information Service, Fisheries and Customs patrols and of course SAR, Search & Rescue, with the Islander carrying a powerful camera, mounted on a gimbal below the aircraft and a fourteen-man dinghy which can be dropped next to any vessel in difficulties while it waits for the nearest SAR helicopter to arrive from Portland.

In many respects new technology available to CNIS, which maintains traffic separation, much like a maritime version of an aircraft Mode C transponder, has actually reduced the aircraft’s mission load because vessels are now required to be fitted with an automatic information system, a mandatory transponder which reports the vessel’s details when it crosses from North Foreland or Cap Gris Nez, into the designated shipping lanes of the crowded Dover straights. The Coastguard Patrol pilots are now only likely to be called if for some reason a vessel is not transmitting and is about to blunder into the English Channel. At this point their pagers start sounding and the pilots are expected to be on scene within twenty minutes, photographing the vessel and acting as the eyes of the Dover Coastguard.