It’s now been six months since low budget airline, EUjet made its home at Kent International Airport, Manston. Simon Moores’ asks EUjet’s Group Commercial Director, Stuart McGoldrick what the challenges have been and what the future holds for the airline. 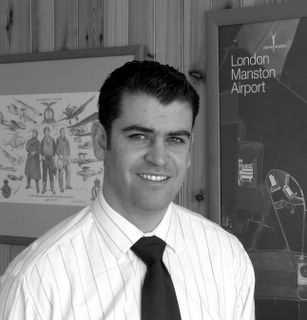 Q: The airline has attracted consistent criticism over punctuality and cancelled flights since its start in September of last year. Is such criticism now a thing of the past?

A: In the last month, we’ve exceeded 95% of flights on time. Previous to that, weather delays presented us with problems in what I’m told is the worst winter Thanet has seen for years. I’m pleased to say that we are now operating at 100% of flights within one hour of schedule with no cancellations.

Q: Are you planning to add any more routes?

A. We just have, at the end of March with our summer routes. We are operating eighteen from Manston and six from Shannon. We cancelled some routes, as you know, because even with the best modelling in the world, we couldn't accurately predict what the Kent market would do when it had its own airline. Certain routes that worked elsewhere simply doesn’t work in Kent and but we’ve learned our lessons and our route network is now stable.

Q: What do you see as the principle challenge in operating from Manston in comparison with other budget airlines operating from Stansted and elsewhere?

A: There are two. We’ve captured the discretionary leisure traffic from Kent and possibly from South-east London. The second challenge is credibility in the market and capturing the attention of the business traveller. This takes time as business travellers are a little different in their needs to leisure travellers and have learned some important lessons here.

Q: In an ideal world, what would be your ratio of business to leisure traveller?

A: Ideally and in the way we’ve built our model here at Manston, the mix would be “fifty-fifty”. Leisure is important but the one problem with leisure is that it’s seasonal and you can’t build a living from it whereas business traffic is key to building our own business. At present business travel represent 30% of our passenger makeup and we need to build a stronger case around credibility, schedule and route network, all of which take time to develop. We started here with scale in order to become an option for the majority of people living here in the Kent region but you can never have enough scale.

We are working on our fundamentals, ensuring that our load factors exceed 60%, which they are at the moment.

Q: Is local infrastructure a problem?

A: We’ve just agreed with South-east trains for an “All-in-one” ticket to Kent International Airport via Ramsgate. We’ve also agreed with National Express to base a fleet of their buses here to service the local towns. Road access is good but could be better and good news for local people is that we have taken a proactive approach to the issue of a taxi service to the airport and we are working with a company called A2 Chauffeur Cars, who are servicing the airport and have a desk there.

Q: With a load factor of 60% are you running profitably or are you taking a much longer term view?

A: No, we are not profitable. We never thought we would be profitable and only someone who has no aviation experience would expect to be profitable in the first year of operations. But what I can say is that we are meeting our core business projections, which place us where we need to be at this moment in time.

Ultimately we are looking forward to more routes, more passengers and achieving Kent International Airport and EUjet as the airport and airline of choice for everyone, in Kent and South-east London.

Anonymous said…
To whom it may concern

I am seriously concerned with regard to the safety of the low-cost airline EUJET based in Manston, Kent, UK.

This communiqué distributed throughout the internet and news media services serves to warn those in authority and passengers alike to the potential dangers of this amateurish airline operation.

Since their name change and inaugural flights out of Manston International airport in Kent, this airline has been plagued with a litany of incompetence business practices.

I originally booked 30 flights and used 12 of them and not one of these flights was on time in fact all of the flights were at least 5 hours or more delayed.

In one case we circled the airport at Manston a number of times while they tried to free the undercarriage . Fire engines and emergency vehicles greeted our eventual return.

We then were herded on to another flight to Spain and after 8 hours and via Murcia we eventually arrived in Palma de Mallorca.

I could write pages and pages on each facet of this grossly incompetent airline and so could many hundreds of other passengers.

I would welcome any comments at the FORUM found at www.thedailymajorca.com entitled EUJET.

Please write and tell your story in order to establish the overall chaos caused by this airline.

My greatest fear is based upon the last two separate flights, one to Palma and one to Faro, in each case the plane circled the airport and had to make an emergency landing.

With over 40 years of flying experience I have never encountered this once, that alone twice in one month on the same airline.

The strange thing is in the most recent case [ 30th April 2005 ]the aircraft had other pre-flight problems and EUJET removed an altimeter from another aircraft to use on this flight just before take off , and when we finally came back to the airport because of faulty undercarriage, they then used the other aircraft that they had removed the altimeter from to complete the journey.

Stranded/Abandon customers across Europe, flights being cancelled, no support staff at any of their destinations, 10 hour + delays.... EUJET are a disgrace and almost certainly dangerous in their operation.