By sending the Deputy Prime Minister to Ramsgate, is Labour tacitly conceding Thanet South as a lost cause? 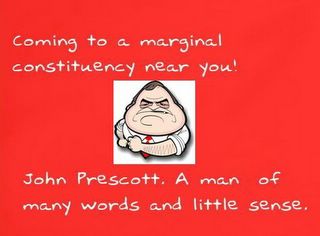 Prescott, a man whose intellect lies at the extreme opposite end of the spectrum from that of Robin Cook, is almost guaranteed to offend the moment he steps off his "Battle bus" and his visit to South Thanet appeared to be no exception.

I have to wonder if Prescott's appearance suggests that South Thanet is so marginal a constituency that it's almost beyond hope or is it an appeal to Old Labour sentiments, Prescott being the last dinosaur remaining in a New Labour cabinet, which now has more in common with George Bush than Nye Bevan.