I'm trying to find some excitement in the news from this year's RSA conference but so far, I haven't had much luck. A year or so ago, I warned that the security industry wouldn't sit too comfortably with a Microsoft that actually bundled security into its products and I think I can detect the first rumblings of disquiet, which may yet turn into scream of "anti-trust".

Information security is worth at least $20 billion as an industry, thanks to the present state of our computing environment. If good anti-virus and spyware were built-in to Windows, for free, as it should be in my opinion, consumers would breathe easier and the business costs of computing would be less.

This won't happen because it's not fair on the security industry to have a more or even "a secure" computing environment.

I wonder what would happen if the military having accepted armoured personel carriers with thinner armour added steel plates to the most vulnerable areas, if the argument was one that if APC's were perfectly protected then APC makers would see their profits drop because their would be little demand for replacements. It's a mad mad world. 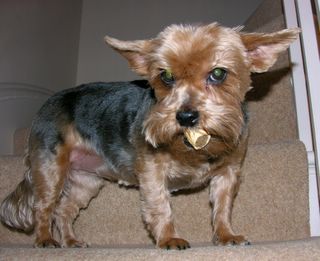 One way of feeding an RFID chip to a Terrier