Watching the inauguration of George W. Bush, I was struck by the uncomfortable parallels with ancient Rome. First you had "Augustus" Bush and then there was "Tiberius W.Bush and next, I assume, it will be Jeb Gaius (Little Boots) Bush -.

For those of you who didn't read Latin at school, Caligula means "Little Boots" a nickname given to him by the legions as a small boy - The son of Germanicus - and their mascot before he went stark raving mad. 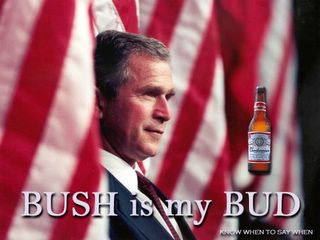 Anyway, it all made me remember the scene in the BBC production of "I Claudius", when Caligula confronts his uncle Claudius:

"Haven't you noticed anything different about me?"
"the light from your face Lord, I could read by it"
"Anything else?"

Claudius stuttering..."Forgive me Lord I should have noticed immediately, you've become a God."

That's America for you I suppose. It's changed rather alot since I went to University there. Like my own country under President Blair, I'm not sure I quite recognise it anymore.