Skip to main content
January 17, 2005
If You need Good Advice on eGovernment...

The trend to devolution is pulling in completely the opposite direction to the central technology programmes There is a contradiction in the government's thinking that threatens to add to the woes of public sector IT implementations. On the one hand is the New Labour philosophy of regionalisation.... continued in (Computing Magazine) 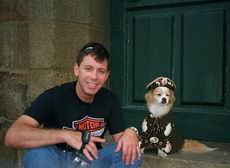 Ask the dog in the hat. It's what I do and you'll get more sense out of him than many politicians, who rather than seeing a bottomless pit of expenditure imagine a "Shangri La" world of joined-up, efficient and cost effective public services. Well, some of them work but mostly in Local Government as we will see in the annual awards ceremony this month but the dog's rather bored expression says it all about Central Government I think.

PS... Microsoft has created a new role: National Technology Officer (NTO). The post's remit is to oversee the development of the software giant's strategy in the lucrative public sector market.

Jerry Fishenden, who has been with Microsoft since 1997, and was previously head of networking at the Houses of Parliament, will fill the role in the UK. He has over 20 years' public sector experience, Microsoft said, and has authored numerous strategy papers on the effective use of IT in developing egovernment programmes.