I wonder if anyone can explain why my wife had her small blunt-ended bandage scissors confiscated by airline security yesterday? Obviously, she and my nine year old daughter fit the terrorist profile to the letter and while one airline tells her "They're medical scissors, that's OK", another gives her the third-degree.

It's rather like the security checks on PCs. At Heathrow T4, you don't have to turn your laptop on but at Manston airport in Kent, which a band of boy scouts could capture if they wished, PC checks are mandatory. 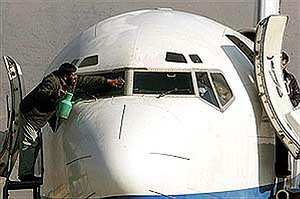 The reality is that airport security is open to wide interpretation and little imagination. Anyone with determination has a very good chance of smuggling a lethal weapon on-board an aircraft, even if it's a sharpened pair of chopsticks, which could kill anyone as easily as a firearm.

Meanwhile and last month, the French managed to lose a kilo of plastic explosive in someone's baggage at Paris airport. They put it there as part of a dog training exercise but lost sight of it on the conveyor and the dog refused to cooperate. The result being a disciplinary action for the security team, a verbal warning for the dog and some poor tourist finding a kilo of blue plastic putty inside one of their bags, hopefully before their next airport baggage check.