Stunned by the scale of the disaster in the Indian Ocean, like many thousands of others, I visited the Disaster Emergency Committee Web (DEC) site, www.dec.org.uk with a credit card at the ready. When my browser returned the error, “The page cannot be displayed”, I was briefly surprised but Google helpfully suggested that the address was correct and offered a link, which I declined, retyping the URL a second time, which successfully displayed the charity’s home page. 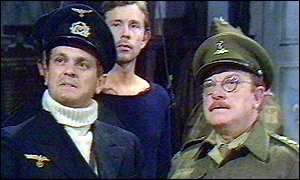 "Don't give him you name Pike"

The reason for the page not appearing first time is that it’s been overwhelmed by donations and enquiries; in fact, as I write this, it’s unavailable. This however wasn’t the immediate reason that sprang to mind on my first unsuccessful attempt. I was suspicious. Why?

Given the unprecedented size of the aid effort, with so many people prepared to give generously over the telephone and increasingly, over the Internet, it’s only a matter of time, I believe before someone attempts to “spoof” the charity effort.

In December, we heard how a West African gang had successfully duped a string of charities, using National Lottery applications for aid and for criminals like this, the Tsunami appeal sounds too good to be true. Call me a cynic but I’m prepared to bet that before the week is out, the first Spam emails will start arriving in people’s inboxes, inviting them to visit DEC or some other well-established charity, to give generously of their credit card or bank details.

It’s an unwelcome sign of the times but paranoia increasingly plays a part on the Internet. Hidden behind a battery of anti-virus and anti-spyware software, I regard any new Web-link or Website with an element of suspicion, unless I have directly typed the address into my browser, which happens to be Internet Explorer, if only because other browsers now available on the Windows platform, don’t appear to offer any greater guarantees of safety than Microsoft’s own Swiss-cheese-like answer to Web safety.

When we first started using the Internet, there was a sense of revolutionary freedom about it, once one had managed to master the intricacies of Gopher, FTP, Mosaic and Winsocks. It was a Harry Potter world for grown-ups and cynicism and paranoia, now very much a part of the post 911 experience, hadn’t made an appearance. Today, it’s a very different place, rich in features, experience and information and with more opportunity to be virtually mugged or offended than any time in human history.

It worries me that in my increasingly online existence, I can’t visit a bank, an auction site or even a charity without looking over my shoulder. My emails have to be scanned for hidden payloads and advertisements, even on reputable news sites, might be concealing spyware or Trojans that have been placed there without the Website owner’s knowledge.

If this experience of lawlessness was common to the real world, then it might be enough to force a change in government, as the population expressed their dissatisfaction but this is the Internet and nobody owns it, nobody controls it and nobody has any idea of how we can recapture the trust and confidence which it clearly can’t offer us in its present form.