I keep getting lost and I’m not alone. I’m here in Oman at the Al Bustan Palace hotel in an area of outstanding natural beauty between the mountains and the sea. The hotel is so large and so fabulously opulent, a palace in fact, that it took me ten minutes to find my way through the marble corridors to breakfast this morning and another ten minutes to find the conference centre, one of the largest auditoriums, I have spoken in. Since then, I’ve lost the former two more times, bumping into other speakers, equally baffled by the maze that is our temporary home until Monday. 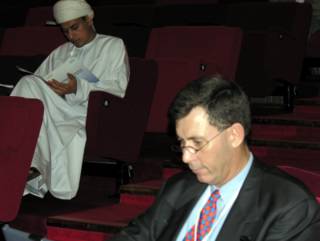 Final tweaks to my presentation

Today started with the familiar and traditional handshaking and official welcome This involves being led into a room with large armchairs arranged along three walls. Dignitaries, speakers, royalty and the British Ambassador, are led in and settled into their chairs, drinking juice and then rising to their feet as another person joins for a series of official handshakes.

First out to bat this morning was Sir Brian Pitman, followed by police officer and computer crime expert from the UK National Hi-tech Crime Unit, Tony Neate. I’m third in the batting order with a presentation entitled “The Shoes of the Phisherman”, with apologies to the Vatican and author Morris West.

Other speakers have come from as far afield as Chile and the United States, all experts in banking and telecommunications and we received a warm welcome at the airport last night, whisked through passport control and then into limousines to the hotel, where we spent a few minutes gawping at the size of its domed roof. It’s a stark contrast with my small town on the Kent coast twenty-four hours ago. We don’t have domes and fountains but we do have a beach and a boating pool rapidly disappearing under the sand.

Just as I arrived in my room, we suffered a power cut and were plunged into pitch darkness for several minutes. I was still unpacking my bag and had to feel my way out of the room into the hotel corridor before finally finding some emergency stairs down to reception. The lifts, of course, had stopped as well. In a maze such as this, escaping a fire might prove interesting.

Oman has leaped forward in telecoms since my last visit three years ago but for some unknown reason my mobile phone and those of others in the group of speakers, doesn’t work. Maybe that’s not such a bad thing but I had no problems on my last visit, so something must have changed. There’s a rapid broadband connection from my hotel room but sadly, no wireless yet, except in schools, otherwise I would be writing and publishing this entry in real time. 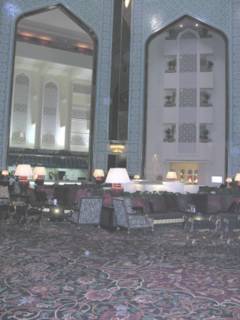 At Heathrow I bought myself to a new digital camera to replace my three year old digital Pentax. I settled on a Nikon 8800 with eight million pixels and with luck, I’ll manage to post some of the photos up on the Web as Windows XP has spotted the camera connection quite seamlessly. The quality is noticeably sharper than the older camera, although the Pentax has the advantage of being pocket-sized and the Nikon is more likely to find it’s way into a rucksack.