I'm in trouble today. I took my daughter out to the beach with her new radio-controlled model aircraft at lunchtime. Up it went, flying perfectly, as I wrestled the controls with both thumbs working the radio control. Higher and higher it climbed, describing a sweeping, high-speed circle towards the sea, which was almost at its low-tide mark.

I hadn't reckoned on an offshore wind blowing more strongly above the cliffs than below. Stupid of me. I couldn't get the damned aircraft to come back my way and I was having to sprint toward the sea to keep it in radio range. Anyway the inevitable happened, I took the power off, hoping that it would glide down on to the beach and it didn't, neatly landing about thirty yards out to sea and promptly disappearing beneath the waves. It must be neutrally buoyant because it didn't come back in with the tide but that didn't save me from the disadain of my nine year old. I might be able to fly big aircraft but in her eyes, my piloting skills leave a great deal to be desired on the smaller types. A replacement is now on order and a lesson learned on flying model aircraft on the beach, however big it might be! 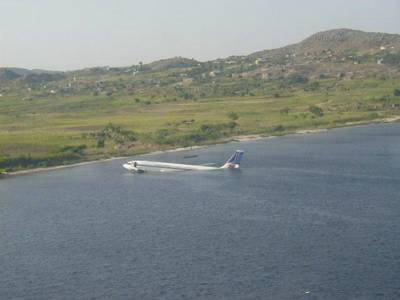 OK.. it was a big model aircraft!