Alright, who saw Meridian News tonight? It was a nice romantic feature capturing "Captain Cupid", AKA Bob Shilling, towing a banner with "Wendy Will You Marry Me", writ large across the sky. 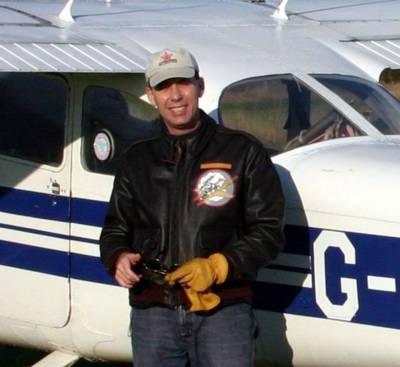 We had to go over to Rochester to film this with presenter Lucy and cameraman, Mike, from Meridian News this morning. The weather was glorious and having just watched the evening news, the story of how the gallant Bob has indirectly proposed to over fifty women, with a little help from the aircraft, came over with just the right romantic touch.

From Rochester then it was over to Brighton to take photographs of a new building on the sea front opposite the pier and then home, via Deanland and a very nice pub lunch outside the airstrip.

In real terms however, today was a minor catastrophe, which is why I went flying. My main laptop crashed, once again, with the identical ISASS.Exe error that had it couriered over to Microsoft for repair at the beginning of November. As before, this left me dead in the water and only backed-up to last Saturday.

So, once again, Microsoft will be sending a courier to collect my PC, for which I am very grateful but it does rather lead me to wonder what an earth is going on with Windows ad whether I really have to back-up all my work files at the end of each day?

So rather than fret over the temporary loss of all my time critical project files, best go flying with Captain Cupid an enjoy the sunshine while it lasts!